Long-suffering readers know I am a great fan of hormesis.

Hormesis is the concept that stress — such as exercise, heat, cold, oxygen deprivation and so on — that’s harmful or fatal in large doses can be healthful in small ones, because it stimulates the body to become stronger.

Thousands of scientists around the world investigate and write about “hormetic” effects.

Here’s a fascinating example from April 2016, published by researchers in Michigan and Ontario, Canada, in the main journal of hormesis, Dose-Response.1

With the provocative title “Treatment of Alzheimer Disease With CT Scans,” it tells of an 81-year-old woman who was diagnosed with Alzheimer’s 10 years previously.

Oblivious and Close to Death…

Her disease had thoroughly ravaged her brain. By April 2015, her doctor and family put her in hospice care, where she continued getting sicker. From the article:

A neuropsychologist examined her on May 21 and found her to be completely nonresponsive… She would only rarely utter a single word and that word would not be appropriate. She was almost immobile; she had not attempted to rise from her wheelchair in months.

But her husband was “aware that low doses of ionizing radiation generally stimulate a patient’s protection systems against diseases and age-related deterioration.”

So he requested, and her physicians agreed, to give her computed tomography (CT) scans.

Doctors normally use these to see brain abnormalities — the radiation they give off is regarded as an unfortunate side effect.

Two days later, her caregiver, who was unaware of this radiation treatment, reported a noticeable improvement. The caregiver was quoted as saying, “She is doing so well that it is amazing. I have never seen someone improve this much. She wanted to get up and walk. She was talking some, with more sense, and she was feeding herself again.

On Aug. 6, she got a third scan, and on Aug. 20, a fourth. After each, her caregivers noted “slow but steady improvement.”

Then, on Oct. 1, she received one more scan, and immediately suffered a huge setback “with an estimated loss of about 80 percent of the gain.”

The authors conclude that the first four scans put her “in the range of increasing radiation-induced beneficial health effects.”

But that fifth scan “brought the cumulative dose beyond the optimum level,” leading to “a significant decrease in the cognitive and mobility benefit.”

This chart helps illustrate the phenomena:

This curve, roughly shaped like a “J,” shows the classic hormetic response. The trick is to limit the dosage to the optimal “stimulating” range — in other words, get it as close as possible to the peak of this curve.

“However, as of Jan. 30, 2016, the patient has recovered beyond her late-August condition, and she continues to improve.”

Most Americans have never heard that low-dose radiation has a long, noble history as a cure for numerous ills. As the authors of this 2016 paper put it:

Many important applications of radiation… were identified in the early 1900s. Many thousands of patients were treated with low radiation with no apparent increases in the incidence of cancer or genetic effects, long after these radiation treatments. The applications include healing of wounds and the cure of a wide variety of infections, such as gas gangrene, carbuncles and boils, sinus infections, inner ear infections, pneumonia and treatments of arthritis and a multitude of other inflammatory conditions.

And animal studies have shown that:

low dose rates enhance longevity; the median life span of a population is usually increased by 10–30%…

Make no mistake. Radiation is harmful.

The low doses the woman received were more than enough to damage her DNA. 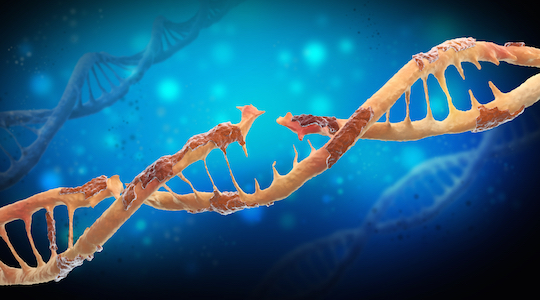 But her body responded by boosting its DNA-repair mechanisms and the overall efficiency of her neurons — just as an overworked muscle responds to stress by becoming bigger and stronger than it was before.

Reviewing this case and others, the researchers believe a weekly CT dose of roughly 40 mGy (milligray, a unit of radiation intensity) per scan, adding up to a total dosage of 160–180 mGy, is the best amount to treat Alzheimer’s disease.

It’s important to emphasize that one case study isn’t nearly enough on which to base a treatment protocol. This needs replication.

However, in serious and apparently intractable cases, the rules are different. If the alternative is swift, sure death, and the family approves of the treatment’s experimental nature, I see no ethical problem.

So what does this story indicate, if anything, to the rest of us who are not in such dire circumstances?

First, don’t sweat the dental X-ray (which is 500 times weaker than a CT scan) or the airport body scanner (which, unlike the “backscatter X-ray” machines that were removed in 2013, doesn’t even use ionizing radiation, the kind that knocks electrons off of atoms).

The larger point is that human beings don’t just survive or endure stress — stress of every shape and description is a fundamental requirement for health.

This is especially true as we get older and are inclined to “dial back” on our discomforts.

It’s vital that you see yourself not as a delicate flower or a fine china plate, but rather as a robust, nearly indomitable organism that seizes and exploits challenges in the cause of becoming stronger.

Virtually every disease plaguing modern humans could be called a disease of physical comfort — of lives that are too sedentary; too protected by climate-controlled, sterile environments; and too lavishly appointed with tempting, tasty food we can’t help consuming.

Acquire discipline. Push yourself. And do more of this as you get older, not less.

The “stimulating” part of that hormesis curve is much bigger than you might guess. Whether through fasting, exercise, cold-water swimming, saunas or the stressor of your choice, explore it!

Type 2 Diabetes - You Can Reverse It!

Improve Mobility - Dramatically - At Any Age