In my gym, I overheard a conversation between a weightlifting trainer — who was in his mid-60s but looked about 50 — and an overweight client.

“No, you are getting older because you’re losing muscle mass,” responded his age-defying coach with a grin. “So let’s get to work!”

The trainer’s pep talk may sound like wishful thinking, but it’s got rock-solid science behind it.

An impressive body of new research shows that weight training — known to exercise researchers as resistance training — really does turn back the clock in important ways.

Even better, you needn’t put in Schwarzenegger-ish workouts to realize those benefits. Even modest resistance training yields huge age-reversing results.

That’s why I put weight training front and center among methods to keep my biological age a solid 25 years lower than my chronological age.

So let’s do a few more reps on the issue…

“An impressive body of new research shows that this fix really does turn back the clock in important ways.”

In our appearance-besotted culture, building robust muscles can seem nothing more than a vanity project.

But muscles are vital metabolic organs — ones that, in our later years, are constantly under attack.

From roughly age 30 onward, muscle mass as a percentage of overall body weight starts to decline if no measures are taken to halt the process.

This shrinkage picks up truly terrifying speed at age 50.

Research shows that without intervention (in other words, exercise beyond a typical American’s daily activity), after age 50, we lose 1–2 percent of muscle mass and 1.5–5 percent of muscle strength each year.1

The results of unchecked muscle loss? A bigger risk of the familiar grab bag of maladies that make up what researchers call the “diseases of aging,” especially heart disease,2 Alzheimer’s disease3 and even cancer.4

There also appears to be a strong correlation between muscle mass and brain function — research says they shrink or grow more or less in tandem.5

All of which would be depressing if there was nothing we could do to reverse the effect of our muscles withering as we age. 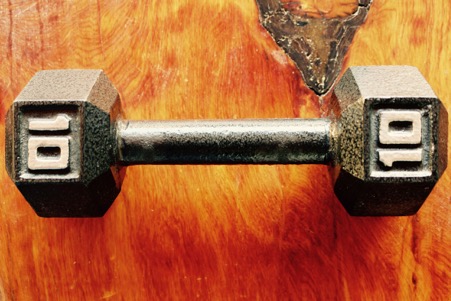 One of the best studies to summarize the health benefits of resistance training was published in Current Sports Medicine Reports.6 Dr. Wayne Westcott exhaustively compiled research on the health and healing effects of weight training and found that its benefits include:

In other words, pretty much every attribute associated with a quality life.

And in terms of keeping disease at bay, he found resistance training can help to manage and/or prevent:

• Osteoporosis, by promoting bone development, with studies showing a 1–3% increase in bone mineral density in response to weight training

• Low back pain and discomfort associated with arthritis and fibromyalgia

Wait a Sec. What Was That Last One?

Folks, weightlifting’s ability to reverse aging at the cellular level is where this gets reallyinteresting.

As you may recall from the October 2016 issue, mitochondria are the tiny “power plants” that feed energy to your body’s cells.

Chronic exposure to stressors that damage mitochondria — such as smoking, excessive drinking, chronically high blood sugar, pesticides or radiation — can raise your risk of cancer.

In fact, the Warburg hypothesis says that cancer is almost entirely due to mitochondrial dysfunction.

If that hypothesis is correct, and I believe it is, it means that anything you do to boost your mitochondrial health will also help prevent cancer.

With all this in mind, now read carefully Dr. Westcott’s conclusion about weight training:

“When it comes to exercise, frequency and intensity don’t matter nearly as much as regularity. So in the beginning, your goal should simply be to show up.”

For roughly the last 50 years, the standard mainstream health advice has been to eat a high-carbohydrate, low-fat, semi-vegetarian diet and jog a few miles every day.

Long-suffering readers are, I hope, now aware that the first part of this advice is pure nonsense. High-carb, low-fat diets set the stage for a massive obesity and diabetes epidemic that began in the late 1970s and continues to this day.

As a guy who spent three decades — from age 20 to 50 — running pretty intensively and not having much except sore knees to show for it, it’s now clear to me that the second part of this advice was also less than stellar.

Because of the unique hazards associated with intense aerobic exercise, including a high risk of injury, it’s simply a questionable choice for a main exercise activity.

I am in favor of moving, whether in the form of long walks or pleasant bike rides, but particularly as we move into our 50s and beyond, a disciplined program of weight training offers more metabolic advantages and fewer risks.

I understand this may not be what you want to hear. Perhaps you’ve never considered yourself a “gym person.”

But you don’t have to tackle this alone. To begin a weightlifting program, make an appointment with a trainer at a local gym. He or she will show you how to use the machines, teach you proper form and develop a program to help you reach your goals.

If you are over 50 and/or hampered by illness or injury, I would encourage you to not use that as an excuse to sit this out. Even modest resistance training programs have profound benefits. In fact, much of the research I’ve cited above is based on programs of no more than 90 total minutes per week, using modest weights.

I am a particular fan of Dumbbell Strength Training for Seniors. This eight-exercise program is within the capacity of virtually any ambulatory person, can be completed in a gym or at home in about 30 minutes and, when done twice a week, can yield dramatic improvements in physical and mental health.

When it comes to exercise, I always say frequency and intensity don’t matter nearly as much as regularity. So in the beginning, your goal should simply be to show up. Commit to a program of two or three times a week. And then, over time, you’ll be able to steadily increase the weight as you become stronger.

To Your Robust Health

What Does a 105-Year-Old World Class Athlete Eat?