For some, skim milk is the epitome of a healthful food.

Sure, it tastes bad — watery, slightly “burned” and not at all filling. We drink it, however, because the experts have long told us that fat-free milk:

Got that? Even 2 percent milk is dangerous — stick with skim!

The best choices of dairy products are… fat-free or low-fat (1% milk).

There’s just one small problem with all this… It’s pure nonsense.

Long-suffering readers have heard me carefully refute dietary fat haters of all stripes.

Skim milk boosters are a subset of the anti-fat brigade who are worth examining closely.

When you are finished with this article, I hope you’ll pour your skim and low-fat milk down the drain and, if you consume dairy, make a permanent switch to full-fat varieties.

We’ll start with a bit of history…

From Fat Pigs to Slender Women

Skim milk is far from a new invention. Indeed, it was commonly consumed in the 1930s. But not by humans — by hogs. 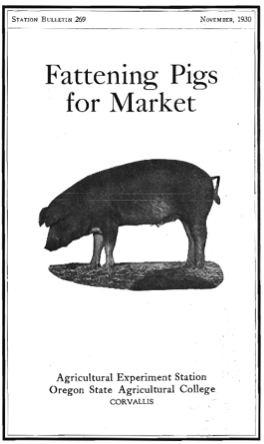 Want a lard-rich, profitable porker? Bring on the skim milk!

Because feeding hogs skim milk was a big win-win for farmers. They would skim off the butterfat from milk and sell expensive, profitable butter to consumers (who had not yet been taught to fear it would “clog” their arteries).

Then, rather than discarding the tasteless, watery remainder, they would mix it with other feed to accelerate their pigs’ fat accumulation. 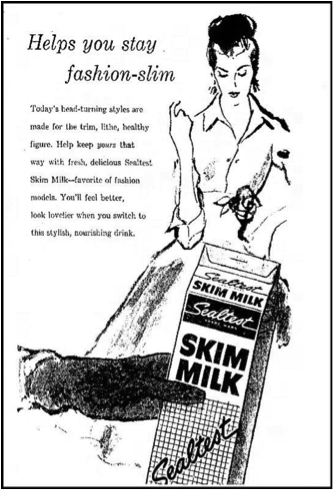 A 1957 ad suggests that pig-fattening skim milk has, mysteriously, the precise opposite effect on a different mammalian species. © Michelle Rhea

As a 1930 manual for hog farmers explains, skim milk “is not only the very best supplement for growing pigs, but is of almost equal value for fattening purposes.”

• Fat in milk provides “satiety,” or the feeling of fullness. Remove the fat, and pigs — or people, for that matter — just keep consuming

• Fat is high in calories, but those calories do not spike insulin — the hormone that conducts sugar into cells, where it is stored as fat. Skim milk, on the other hand, has a roughly 20 percent higher percentage of lactose, aka milk sugar, compared with whole milk

• Skim milk also has a higher percentage of protein than does whole milk. Through a process called gluconeogenesis, the body converts excess protein to sugar. (This is one of the reasons my High-Fat, Real Food diet, laid out in the June 2015 issue, does not specify increased protein consumption — most Americans already get plenty).

But by the Nifty 1950s, propelled by the dodgy anti-fat “science” pushed by the USDA and sleazy researcher Ancel Keys, skim milk got a huge makeover. Now the same stuff that quickly fattened pigs was touted as a marvelous slenderizer for human beings.

Notice that skim milk’s pig-fattening prowess appeared in science-driven manuals on animal husbandry, while its rebranding as a way for humans to become “fashion-slim” was purely a marketing invention.

In fact, this year, two large studies revealed that if you want to remain slim (and free of Type 2 diabetes), consuming full-fat dairy is your best option.

And the Women’s Health Study discovered that women who ate high-fat dairy had an eight percent reduced risk of becoming obese over time compared with those who ate low-fat dairy.2

Skim milk is almost totally without nutritive value, because the vitamins that milk provides in abundance — A, D, E and K — are all fat soluble.

That means unless they are consumed along with fat, the body cannot use them.

Especially worrisome: The calcium in milk can’t strengthen bones unless it is accompanied by absorbable vitamin D. No fat, no “D” absorption, no calcium deposition in the bones. In fact, the lack of D may explain why skim milk consumption is associated with an increased risk of prostate cancer.3

“A high intake of saturated fat is associated with a significantly lower risk of heart disease.”

As bad as all of that is… consider this final disaster.

Back in its pig-feed days, skim milk was just that — the leftover fluid after fat was “skimmed” from a vat of milk.

But these days, to increase profits, skim milk is often “fortified” with additional skim milk powder, which is made via a high-heat process that adds oxygen to milk’s cholesterol (in other words, it oxidizes it).

Conversely, a new Dutch research effort following 36,000 people clearly shows that high intake of saturated fat (like the kind in full-fat dairy products) is associated with a significantly lower risk of heart disease.5

It’s almost as if skim milk is designed to raise obesity, diabetes and heart disease risk, while whole milk lowers it.

Fortunately, we’ve entered a new age in the public’s conception of dietary fat.

While the AHA and the ADA drag their institutional feet — almost certainly because they are funded by an egregious combo of carb-pushers and drug companies — the public at large is beginning to wake up.

Skim milk sales have dropped a whopping 25 percent since 2014. Whole milk sales are up 6 percent over the same period.

But all in all, reduced fat milk products, including skim, still outsell whole milk two-to-one. People are waking up, slowly, but plenty of us remain asleep.

Adults do not require cow’s milk for health, and many people are incapable of comfortably digesting lactose, the sugar in milk.

However, if you are not lactose intolerant and enjoy dairy foods,
I recommend:

• Choosing full-fat versions (often labeled “whole” because the term “fat” still terrifies many people) that are “grass-fed,” “pasture-raised” or at the very least “organic”

• When possible, choose fermented dairy such as cheese or yogurt, since these are often easier to digest than milk. Yogurt can also help to feed beneficial gut microbes

• Raw milk if you prefer it. It may offer extra vitamin content, and is safer than many commercially produced foods if the cows are cared for properly. For a list of raw milk producers, click here. For a review of national and local laws regarding raw milk sales, click here

Personally, I find a slice of full-fat cheese, an occasional full-fat yogurt with berries (such as blackberries) or butter on veggies to be great additions to my low-carb life.