“I’m not interested in age. People who tell me their age are silly. You’re as old as you feel.” — Elizabeth Arden

“How old would you be if you didn’t know how old you are?” — Satchel Paige

When I was 17 years old, I agreed to spend an entire summer on my uncle’s farm in Monmouth, Oregon, trimming 10 acres of overgrown hazelnut trees… with a ladder and a rusty saw.

“This is perhaps the most important healing force we can muster, and the older we get, the more it matters.”

After my first day, I had trimmed 15 trees out of roughly 3,000. Recognizing the hopelessness of the task, on the second day, my uncle hired his friend Clarence to help.

To this day, I’ve never seen a human being work so hard, skillfully and cheerfully. With just a pruning handsaw (this was 1972 — chain saws existed, but one never materialized), Clarence could handle 100 trees in a day. All the while, he sang, told bad jokes, shared his wisdom regarding women (he was on his fourth marriage, but apparently enjoyed them all) and generally seemed delighted to be doing this godawful job with a clueless teen in the midsummer heat.

I would have guessed Clarence was an unusually fit 50-year-old.

The next day, I asked Clarence if he was really 76. He smiled and said, “That seems about right… I don’t give it no never mind.” Then he went back to work, whistling.

Clarence was my first introduction to a human being who transcended his age. A lifelong farmworker, as he scrambled up those trees and lopped off limbs, it was crystal clear that he really assigned zero importance to the number of trips he had made around the sun. He was just happy to be here now, doing what he was doing.

Cultivating the Way of Clarence

I thought about this superhuman oldster as I combed through a new study on the vital importance of attitude as one ages.

The research is clear: While eating right, exercising and managing stress all matter, perhaps the most vital key to remaining healthy after age 60 is maintaining a positive attitude about aging — and life in general — just as Clarence had.

The advantage is far from just theoretical.

“The way we think about, talk about and write about aging may have direct effects on health.”

One Yale University study recorded how 660 people who were 50 or older felt about aging.1 It found that those who had “positive perceptions of aging” lived on average 7½ years longer than those who had a negative attitude about getting older.

Now, you may think this remarkable result is due to something else, say wealth inequality. After all, wealthier people can afford better food and health care; perhaps that is the real underlying cause of the disparity in longevity? 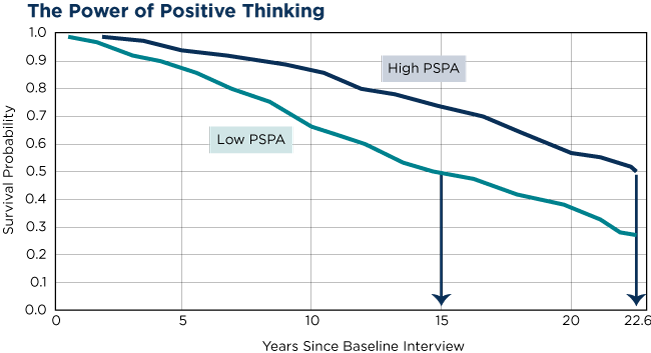 The boost in “survival probability” for those with positive self-perceptions of aging (PSPA) in middle age worked out to an average of 7½ more years of life.

But as the Yale researchers noted, the age advantage remained after “socioeconomic status” was excluded as a factor. In other words, rich or poor, a positive attitude tacked on nearly eight years.

In this particular study, researchers asked participants if they agreed or disagreed with questions such as:

• “As I get older, things are better/the same as I thought they would be.”

Answering in the affirmative was associated with longer survival. Conversely, people who agreed with statements such as “Things keep getting worse as I get older” or “As you get older, you are less useful” tended to die earlier (perhaps gratefully, given their dour outlooks!).

Living longer is far from the only advantage that comes from a positive view of aging. In a 2016 study2, more than 4,000 Irish men and women were asked questions about aging. They were followed up two years later, and it was found that older people who had a negative view of aging walked more slowly and had reduced thinking skills compared with those with more positive views.

“Cheese, wine and violins improve with age, and so can people with the appropriate attitude.”

As lead researcher Deirdre Robinson, Ph.D., put it: “The way we think about, talk about and write about aging may have direct effects on health. Everyone will grow older, and if negative attitudes toward aging are carried throughout life, they can have a detrimental, measurable effect on mental, physical and cognitive health.”

If you’ve tended to grouse and crab about aging, take heart: It is never too late to change.

First, realize that many of our views about aging are cultural — and cultures vary widely. My good friend Andrew Weil., MD, told me this tale about Okinawa, which has the world’s longest life expectancy (of people over 65, men live on average to 84, women to nearly 90):

In the rural areas where the traditions still hold sway, when you are introduced to an elderly person, they immediately tell you their age as a matter of pride. For example, one might say, “Hello, I am Ayano Kinjō, I’m 91!”

It’s fascinating to realize that in the U.S., where many regard aging in terms of decay and decline, it’s a good idea to forget your age as Clarence did, but in a place like Okinawa, the smart move is to focus on it.

Similarly, elderly Okinawans themselves tend to do precisely what everyone else does: farm, fish, cook, socialize. “There is nothing in the language or culture resembling the Western concept of retirement,” Andy told me. “I’ve tried to explain it to people there, but they don’t get it — the idea of no longer being productive just doesn’t compute.”

Second, a Yale study showed taking part in a “positive age stereotype intervention group,” in which participants were encouraged to see the best aspects of growing older, had the amazing effect of producing better health improvements than a six-month exercise program.3

In short, I am a big fan of eating right, exercise and all of the other “mechanical” interventions that can lead to healthful aging.

But if I had to choose, I’d choose attitude over nutrient-dense foods and hoisting iron. The power of positive belief is perhaps the most important healing force we can muster, and the older we get, the more it matters. There is a power and grace that comes with age that, before I was 61, I would not have thought possible — you just simply have to choose to feel and believe it.

There is no one way to develop a positive attitude about aging — how you will do so depends upon your circumstances and inclinations. But allow me to offer these suggestions:

Pay close attention to people who exemplify positive aging. I love, for example, to comb through the world’s records in Masters track and field competition. It’s always a thrill to realize that a 70-year-old man, for example, has run a mile in 5 minutes and 19 seconds or a marathon in 2 hours and 54 minutes.

Let me emphasize: I’m not saying that you, or anyone in their later years, should perform such prodigious feats… Instead, they serve to remind us of potentials. A few moments spent in contemplation of such people can inspire us to walk two blocks after dinner rather than one!

Similarly, never regard yourself as too old for any mental or intellectual challenge. The older I get, the more I relish activities that once terrified me — public speaking, for example.

And watch your language, being especially careful not to frame aging as a negative. Cheese, wine and violins improve with age, and so can people with the appropriate attitude.

I’ll leave the last word to Walter Breuning, a retired Montana railway clerk who offered this advice just before his 114th birthday:

Tell yourself that every day is a good day, and make it that way.

Neither Clarence nor I could have said it better. Happy holidays!

Is Your Cholesterol Too Low?