A study1 comparing the way various Europeans eat has shown, yet again, what we’ve all heard over and over from mainstream health authorities.

Consuming foods high in saturated fat (like the kind in butter and beef) is associated with high total cholesterol in the blood.

But here’s the switch-up…

In Europe (which is the source of most of my information, as the continent’s journals aren’t so compromised by Big Pharma dollars), high total cholesterol is associated with a lower risk of death from cardiovascular disease, also known as CVD. See for yourself: 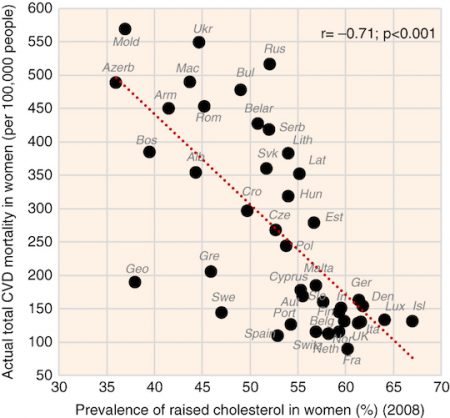 This particular chart shows the data for women, but the researchers noted that the correlation is “always negative” for both genders. Note that in France, women eat loads of saturated fat, have nearly the highest prevalence of raised cholesterol and have the fewest deaths from heart disease.

But the researchers did find something that was highly correlated with cardiovascular disease — high carbohydrate consumption. This led them to conclude:

“We are convinced that the current recommendations regarding diet and CVDs should be seriously reconsidered.”

When people switch to a low-carb, high-fat diet, it is not uncommon for their total cholesterol to go up.

And should you think that, specifically, high levels of LDL cholesterol — the so-called “bad” cholesterol — are what are truly dangerous, consider this. Another large new study2 found that higher-than-average LDL cholesterol after age 60 is a major predictor of longer life.

Cholesterol, “good” or “bad,” is a vital molecule, essential for mental and physical health, robust immune function and more. It’s been demonized not because high total cholesterol predicts heart disease risk (it’s been clear for at least 10 years that it does not), but because drugs can lower it, so making people fear cholesterol sells drugs.

The only kind of cholesterol test that may indicate higher disease risk is a rather rare and expensive type called LDL-P, which measures the number of actual LDL particles in the blood. Higher values are worse, because they indicate lots of so-called very low-density lipoprotein (VLDL) particles, which are the kind likely to be lodged in blood vessels. More on that in upcoming story, but for now, I’ll tell you that the numbers for this test are:

Meanwhile, LDL-C — the cheaper and far more common test — is close to meaningless.

The day will come when we will look back on the last 50 years of crude cholesterol-lowering therapies as a dark period in American medicine.