In a story titled “A Gut Makeover for the New Year,” The New York Times served up a classically faux “fact.”

I’m sharing it with you here, now, because this certainly won’t be the last time it happens.

Microbial diversity may be further undermined by the typical high-calorie American diet, rich in sugar, meats and processed foods…

But notice the lumping together of the components of a “typical” gut-wrecking American diet, “rich in sugar, meats and processed foods.”

But are we really eating more meat? 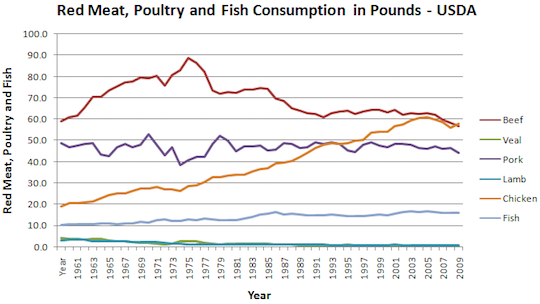 Where’s the beef? Or pork? Or lamb?

… while beef-eating has plunged 35 percent! Considering beef’s drop and chicken’s rise, the overall percentage of calories from animal-based foods hasn’t changed much during the period in which The New York Times suggests — obesity and diabetes epidemics raged due to declining microbial diversity.

So much for blaming flesh foods.

So what kind of food are we eating with abandon these days? Voila: 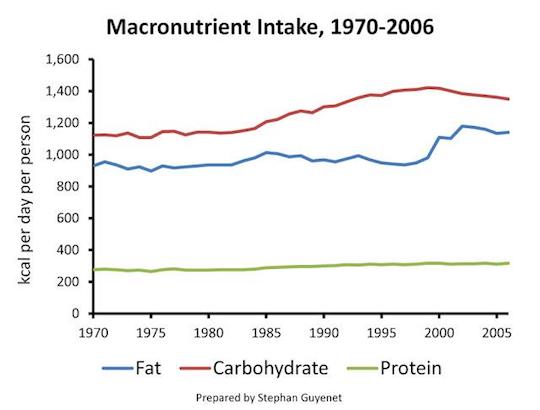 Fat intake is a bit misleading in this chart, as most of the increase is from cheap, inflammatory soybean oil, not animal-based fat. But note the unmistakable boost in carb consumption compared with the flat protein intake.

In other words, cooking the books to demonize meat, a favorite ploy of Big Carb, Big Pharma and Big Journalism, has come roaring out of the gate.

But you don’t need to fall for it.

Sugar, grains and vegetable oils are constantly thrust at us because they are cheap, centralized and have huge profit margins.

Meanwhile, the folks who produce beef, pork and lamb (especially pasture-raised, organic versions) are decentralized and operate on razor-thin margins.

Big Food wants you to be a vegetarian… or, better yet, a vegan, one who eschews all animal foods and eats boatloads of “heart healthy” grains.

So a favorite trick of pro-vegetarian forces is to fling the term “meat” into lists of clearly unhealthful foods, a bit of “guilt by association” prestidigitation.

Don’t believe it. Human beings and hominids have a 2-million-year history of meat (and unprocessed plant) consumption and barely a century with copious grain-based carbs, sugar, soybean oil and other denatured health destroyers.

My Lucky Encounter with a Smashed Window

The Power of the Crockpot