So began a recent email (without the asterisk) from a surgeon in the American South.

Well, I always welcome criticism, even if “colorfully” expressed. It’s how one improves.

So let’s take his observations one at a time and see how valid they are.

The doctor was reacting to an article in which I suggested that a low-carb, high-fat (LCHF) diet was superior to stomach surgery as a treatment for diabetes.

I am a bariatric surgeon and we have known for over 20 years that weight loss surgery of all types does, in fact, cure diabetes.

Hmmm. A careful reading of my article makes it clear: I never questioned whether bariatric surgery could cure diabetes.

In fact, I wrote that surgery could be an appropriate last-resort option for intractable cases. If I thought it didn’t work, why would I do that?

What I objected to were these facts:

I stand by my objection.

Do some real research and stop giving the wrong and misleading attention-getting headlines you use to get your articles read.

Again, hmmm. Research is virtually all I “do.”

Bariatric surgery is any surgical procedure performed on the stomach or intestines to induce weight loss.

There are six kinds widely used in the U.S. today.1 All involve either constricting or bypassing parts of the GI tract to reduce hunger and/or restrict the body’s ability to break down and absorb food.

And here are typical side effects of a common form of bariatric surgery: 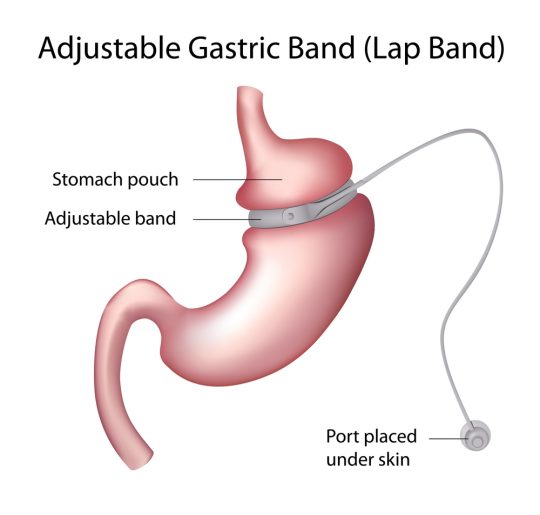 It involves wrapping a “lap band” around the stomach, and it goes awry… often. A 2011 study found that:

because nearly one out of three patients experienced band erosion, and nearly 50 percent of the patients required removal of their bands (contributing to a re-operation rate of 60 percent), [lap band surgery] appears to result in relatively poor long-term outcomes.2

Another common type of surgery is called Roux-en-Y (RNY) gastric bypass. As you can see, the surgeon makes a tiny “gastric pouch” from stomach tissue and sews the upper part of the small intestine directly to it, bypassing the stomach: 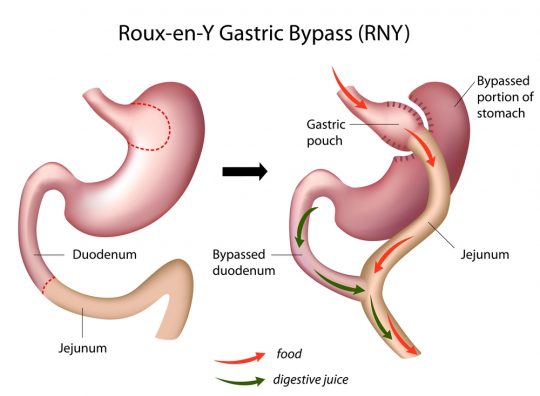 What could go wrong?

A study of 328 RNY patients followed for up to 13 years revealed that:

So one in five patients had complications requiring more surgery, and nearly all of them ended up malnourished.

Turns out that whacking out or bypassing most of these individuals’ digestive tracts wrecked their ability to absorb vitamins, minerals, macronutrients and water.

Who would have guessed?

One study that followed diabetics for 36 months found that 72 percent of gastric bypass and 17 percent of lap band patients were in remission.4

But interestingly, the average of those success rates is similar to the 44 percent success rate in getting off medications shown in a 2016 study of diabetics following low-carb diets.5

And they didn’t need dicey, failure-prone surgery to get there.

“Removing healthy organs is not the solution to bad food,” notes Dr. Andreas Eenfeldt, a prominent advocate for LCHF diets.

A low-carb, high-fat diet — the common treatment for diabetes until the 1960s, when drugs and surgery took over — should not become a forgotten or ignored stepchild of diabetes care.

It should be the primary intervention, as an impassioned article written by 26 researchers recently urged in the prominent journal Nutrition.6

Combine it with some modest intermittent fasting and gentle exercise and you have a potent, safe, cheap therapeutic trio against a disease that the Centers for Disease Control predicts will afflict one-third of Americans by 2050.

No one is perfect. I have been (on rare occasions, I hope) full of sh*t.

This wasn’t one of them.