Never forget Big Food will do almost anything to get you, the customer, to eat:

Because, thanks to corporate mega-farms and Uncle Sam’s subsidies, these are astoundingly cheap at wholesale, so the potential markup is huge.

The challenge? The public is smart. They know this stuff is nutrient-poor cattle feed. They want real, nutrient-dense food — as in meat and vegetables.

So Big Food’s goal is to trick you into thinking grains and/or soy are meat and/or vegetables.

The classic example of this scam is calling soybean oil “vegetable oil.”

Please understand that in America, what’s called “vegetable oil” is nevermade from broccoli, carrots, lettuce or anything else most people would associate with the term “vegetable.”

The Subway sandwich chain made news last week when it was caught in another example of this deception.

Turns out that the “chicken” in its sandwiches contained only 42.8–53.6 percent chicken DNA, with the remainder coming from — you guessed it — soy, according to a Canadian Broadcasting Corp. report.

While claiming its chicken contains “1% or less of soy protein,” they also said they would “look into this again with our supplier.”

Right, Subway. You do that.

In the meantime, I’m going to guess that the two independent labs that agreed on these findings are somewhat more believable than your sputtering PR department.

So with that in mind…

Is There Any Fast Food I Can Eat? 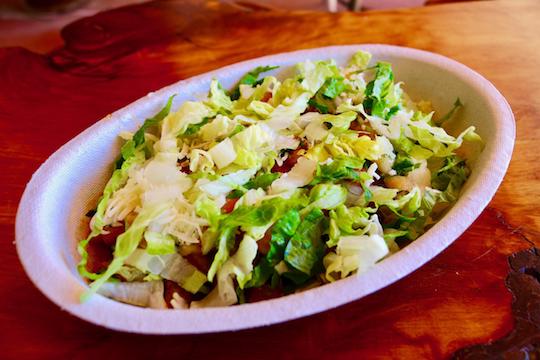 This “bowl” from Chipotle contains steak, pico de gallo sauce, shredded cheese and lettuce. Low-carb, relatively sustainably sourced, tasty and, at about $8, not a bad deal.

My wife, Laurie, and I are seasoned American road-trippers, frequently blasting out of our home in Tempe, Arizona, to see friends and family in Oregon, Missouri and Maryland.

When we do, more often than not, we eat at Chipotle, for a couple of reasons.

I have no relationship with this company. I’d be glad to expand beyond it and eat at other fast-food operations with similar policies. But for the moment, Chipotle is our top choice. 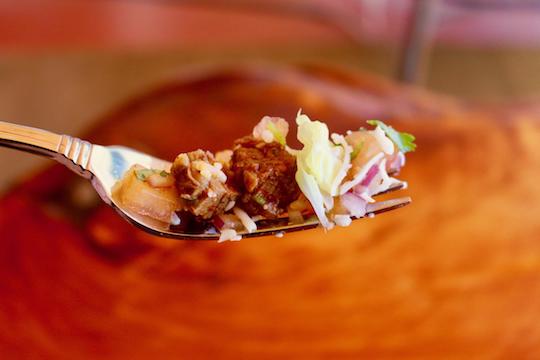 A nutrient-dense forkful: steak, lettuce, cheese and a touch of cilantro.

And re the inevitable question about Chipotle’s infamous E. coli contamination problem in 2015, I’m persuaded that the company has addressed it responsibly.

One could argue that Chipotle is just another big company that does not deserve to be trusted on this issue, but it makes good sense that they’ve truly revamped their procedures. Sick customers are very bad for business.

Remember that feeding you grains and soy and calling it meat and/or vegetables is standard operating procedure at virtually every fast-food chain, not just Subway.

That’s why what’s billed as “chicken” or “fish” in these places always comes with a thick coating of fried (that is, soybean-oil soaked) batter — the “meat” inside is either a slender strip or some sort of meat-grain-soy slurry.

But there’s no particular reason that a roadside fast-food chain must offer deceptive, unhealthy meals.

A typical meal at Chipotle costs just two or three bucks more than one at Subway or one of the massive burger chains. It’s money well spent, and judging by the long lines at Chipotle outlets we’ve visited, customers tend to agree.

What Does a 105-Year-Old World Class Athlete Eat?

The Amazing Food That Cuts Your Depression Risk 50%