Well, it’s time for the third (and last for a while, I promise) article in an irregular series I call Very Old People Who Eat the Wrong Foods.

To date, you, my wonderful readers, have endured been treated to two installments of this saga:

My not-so-subtle point in chronicling these centenarians and supercententarians (folks 110 years old and older, a much more exclusive club) is to illustrate that mainstream advice to limit saturated fat and cholesterol for the sake of health and longevity isn’t necessarily right.

However, I realize that these vigorous mega-seniors provide only anecdotal examples of a low-carb diet’s life-extending powers.

Consequently, featuring them here does not present as “fair” a view as the study-driven evidence I usually give you.

So I should not write these articles too often… yet I can’t really help it.

With that in mind, meet 105-year-old French cyclist Robert Marchand. 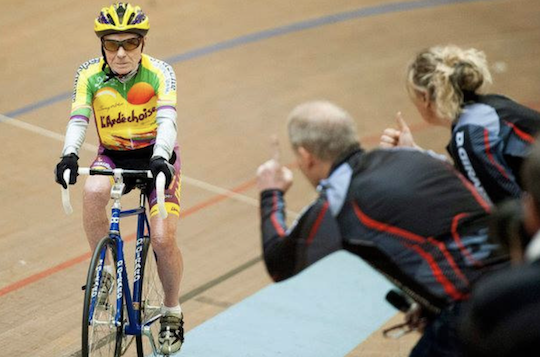 Robert Marchand on his record-setting ride at the Velodrome National in Saint-Quentin-en-Yvelines, just outside Paris.

Born in 1911, last month M. Marchand set a world record for his age group by pedaling 14 miles on an indoor track in one hour.

(No one his age had even attempted to capture the one-hour distance record, so after the feat, the 105-and-above category was created just for him.)

What fascinates me is The New York Times’ account of M. Marchand’s diet.

It is “simple, focusing on yogurt, soup, cheese, chicken and a glass of red wine at dinner.”

This is not only “simple,” but strikingly high in fat and low in carbohydrate.

Yogurt and cheese in France are nearly always the “full-fat” variety. French soups are typically fat-rich as well.

Chicken is a zero-carbohydrate food, and a typical five-fluid-ounce serving of red wine contains less than four grams of carbohydrate.

Yet the vegetarians — even in France, apparently — are relentless. It appears that someone convinced M. Marchand, who pedalled 17 miles in one hour at age 103, to become a vegetarian a month before his latest ride.

Yet just recently, his physiologist stated that M. Marchand would have been faster than he had been two years ago if he had not given up meat.

I would tend to agree.

Bottom line: Had I been M. Marchand’s trainer, I would have urged him to keep eating the way he had been eating for the last century, as it seemed to be working out rather well.

I look forward to his returning to his omnivorous low-carb lifestyle and setting a new record at age 106.

Slow Down Aging - This is the Best Way